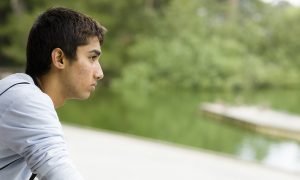 All children should have the chance to grow up safe from harm within a caring and protective environment that enables them to thrive. Unfortunately, millions of children around the world are deprived of their rights because of their life circumstances. One such group is children on the move, such as those fleeing conflict and disaster.

We’re undertaking research with unaccompanied young people in Germany, Greece and Lebanon in order to learn more about their experiences. This will help us to campaign for better policies and support systems which could help them to live a fuller life as part of their new community. Here is a snapshot of what Hilke and Lisa have been hearing so far from young people in their local community in Germany.

The majority of young people we spoke to came from countries experiencing conflict, such as Afghanistan and Syria. One of their main reasons for travelling to Germany was to no longer worry about attacks, bombs and other types of violence.

Milad told us that, “If you feel secure, then you can learn better, think better and work better. But if you don’t, and there’s no security, you can’t work, you can’t learn, you can’t do anything.” On the other hand, we also heard that there was a constant worry about their families back home. He continued, “… our parents are far away, I mean they are in Afghanistan and I am here. I always think about my family because I think: ‘Oooh, what happens now?’”.

Many young people are under pressure to start earning so they can send money home, whereas others are forced to leave education and start vocational training in order to be granted residency. One young person, Aras, told us that prejudices about refugees meant that it was commonly assumed that they all wanted to immediately become “painters, cooks, roofers or tilers”, whereas in fact many would like to continue in education – and being forced into this so early could be harmful to their future.

Some young people talked about working so they could avoid being seen as depending on the state. Aras works from 7am to 4pm, and then another evening job, so he can avoid this negativity. Another young activist, who now advocates with the organisation Youth Without Borders, said that the press reports on migrants cause her to feel negatively about her own life. She said, “…over time, you’re no longer motivated because you don’t see any meaning in life at all.”

These, and many more findings, are explained in more detail in our new research paper, “Challenges for unaccompanied children in Lower Saxony” with is available to download from our Resource Library. Over the coming months, we will to turn what we have heard from children and young people into policy recommendations, and advocate for better support for children on the move.

A Big Idea for Children on the Move