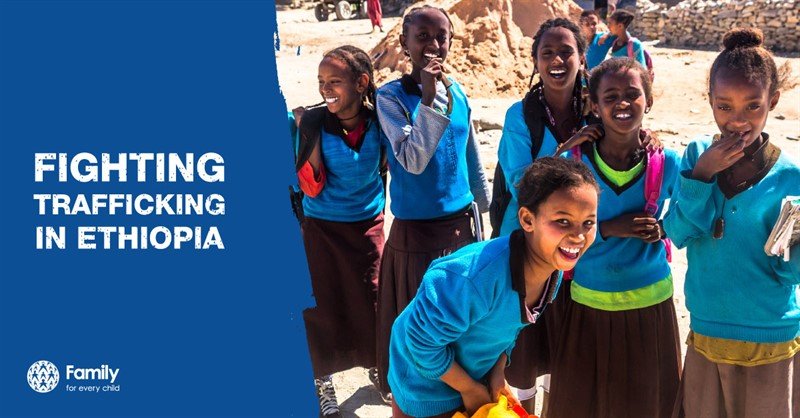 Family for Every Child’s member organisation in Ethiopia, Forum on Sustainable Child Empowerment (FSCE), is working with local communities to help them lead the fight against child trafficking. Years of war, famine, poverty and gender inequality place Ethiopians at an elevated risk of human trafficking. The Global Slavery Index estimates over 600,000 Ethiopians are living in modern slavery – an industry fed by trafficking adults and children throughout the country and across borders. Children in Ethiopia can be tempted to undertake these 9dangerous journeys by child traffickers who offer them a bright future. Children may be fleeing child abuse, family breakdown or economic issues such as poverty or unemployment. Trafficked children not only miss out on basic rights such as healthcare and education, but are at heightened risk of being robbed or raped along their journey by traffickers, border officers or others.

Stopping trafficking where it happens

Bus terminals are common transit spots for trafficked children. Since 2013, FSCE has established counter-trafficking committees at Ethiopia’s main transport hubs in a strategic attempt to intercept traffickers and trafficked children in these key locations. Counter-trafficking committees are made up of people working in and around the bus terminals who have the highest potential to come into contact with children who are being trafficked. Members can include bus drivers, hotel receptionists and bus owners. FSCE equips committee members with tools to identify children they suspect are being trafficked. They monitor children under 18 years old who arrive at bus stations and interview the child and the person accompanying them. Even if trafficking is not immediately apparent, members have been trained in the use of special interviewing techniques that mean they’re more likely to notice the signs. If there is evidence of trafficking, the child is taken to the committee’s office at the bus station and the trafficker is referred to the police station. An FSCE worker will make sure the child is accommodated in a temporary shelter while their family is traced. As part of FSCE’s services, the child can see a psychologist and they’ll be taken to hospital if they’re sick or have been sexually assaulted. If there is no family for the child to return to, FSCE provides shelter and vocational training to try to prevent a repeat of the circumstances that led to the child being vulnerable to trafficking.

Helping Tariku change the direction of his life

Just one of the children helped by such a committee is 15-year-old Tariku, who was intercepted at the main national bus station in Addis Ababa. Tariku lived with his parents, brother and sister in southern Ethiopia. Tariku’s family was in poverty, and a trafficker from his local area persuaded Tariku to travel to Addis Ababa with the promise he would be able to secure a better job and income. The committee intercepted Tariku on his arrival and referred him to the FSCE. To give him the best prospects for his future, Tariku was supported by the FSCE to start a business and reintegrate himself into school. This community collaboration has affected real change in the fight against child trafficking in Ethiopia. Over the course of 12 months, 450 children were intercepted by the committee and integrated back into their communities.   FSCE, Family’s Changemakers organisation in Ethiopia, was founded in 1989 in response to the increased number of orphaned and abandoned children in Addis Ababa after the drought and famine of 1984/1985. FSCE is now active in several cities in Ethiopia. It works to prevent family separation by strengthening families and reintegrating children in difficult circumstances or those who have experienced serious exploitation.

A very special ‘thank you’