Stop the bloodshed in Colombia: an urgent call for change 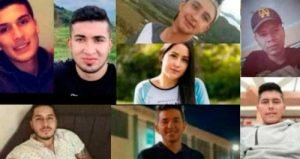 Family for Every Child calls on the Colombian government to urgently increase protection for communities, following the murder of 15 young people by armed groups in recent weeks.

Although a peace deal was signed in 2016 with the country’s largest rebel group (Farc), violence is continuing across the country as rival groups and drug cartels fight for control. This can lead to indiscriminate murders of innocent people who become caught up in the violence while going about their day-to-day life.

The recent murders have involved multiple teenagers being murdered while at a barbecue, another multiple murder of teenagers as they met in the street.

No child should have to grow up with the threat of violence.

At Family for Every Child, we add our voice to those calling on the Colombian government to truly advance the peace process, to dismantle illegal groups and to strengthen the justice system; as well as urgently increasing state protection for vulnerable communities.

Our Changemaker organisation in Colombia, Taller de Vida, works with children affected by the armed conflict in Colombia. They are working to raise awareness of these attacks and to call for better protections through their Light A Candle campaign. Visit their Facebook page for more information.

A Big Idea for Children on the Move